Interrupted aortic arch (IAA) is a congenital anomaly where there is interruption or discontinuation of a segment of the aortic arch. IAA is frequently associated with ventricular septal defects (VSD) and a bicuspid aortic valve. IAA type B is specifically associated with a posterior malalignment ventricular septal defect (VSD) with resultant narrowing of the left ventricular outflow tract (LVOT) and hypoplasia of the aortic valve.

Among patients with congenital heart disease, IAA occurs ~1% of the time, with IAA type B being the most common form.

Among patients with IAA, specifically type B, >50% have 22q11 deletion (DiGeorge syndrome). This is infrequently seen with type A or C.

There are three subtypes which are classified according to the site of the interruption:

Type A (~33%): Interruption occurs after the aortic isthmus, just beyond the left subclavian artery and proximal to the ductal insertion.

Type C (<1%): Interruption occurs between the innominate (or brachiocephalic) artery and the left common carotid artery.

Prenatal diagnosis is possible which can identify interruption site and vessels arising from ductal arch. Typically the portion of aorta which is proximal to the site of interruption will have an unusual configuration and end at the site of interruption with the brachiocephalic vessels directed straight towards the upper body. If not prenatally diagnosed, infants will present in the neonatal period as they have ductal dependent systemic blood flow. Neonates will require prostaglandin-E1 (PGE) administration after birth until surgical repair is performed.

Neonates with IAA may initially have differential cyanosis secondary to right to left shunting at the duct. Depending on the site of interruption, there may be higher saturations in both arms when compared to the legs (type A). In type B, the right arm will have a normal saturation, while the left arm and legs are desaturated. If the neonate’s ductus arteriosus (PDA) begins to close, he or she will develop signs of poor perfusion and cardiogenic shock including hypotension (distal to site of interruption) with poor pulses, decreased urine output, and lactic acidosis. BP measurements proximal to the site of interruption may be normal or even hypertensive.  It is possible to not have an upper extremity to lower extremity blood pressure gradient with this lesion (as is the case with interrupted aortic arch Type B with an aberrant subclavian artery as both subclavian arteries (arm blood pressures) originate distal to the arch interruption

As the majority of patients being evaluated for IAA are neonates, a high frequency probe should be used for optimal resolution. Echocardiography is the initial imaging modality used to diagnose IAA. On assessment, special attention is placed on identifying the following: 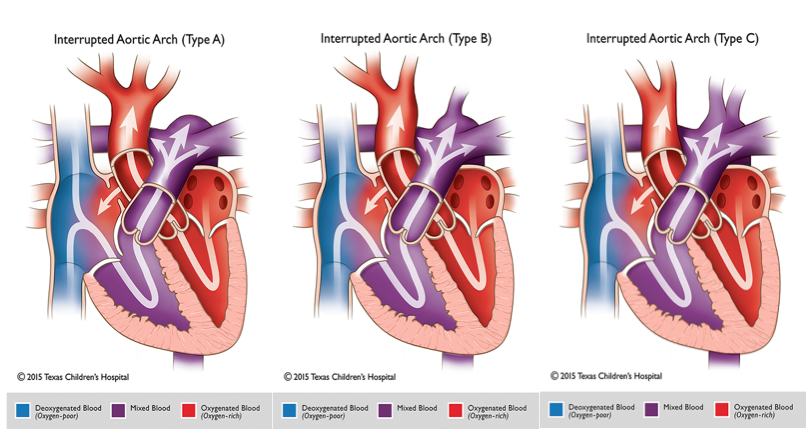