TAPVC has been described in 9 in 100,000 of the population. Supracardiac TAPVC is the most common type (47% in the largest published series) and in this group the most common site of connection is to the left innominate vein (36% of all cases).

Genetic and syndromic associations include Cat eye syndrome, Heterotaxy syndrome (TAPVC most common with right atrial isomerism and PAPVC with left atrial isomerism) and Holt-Oram syndrome. A monogenic pattern of inheritance has been suggested. In a large Utah kindred, the gene for TAPVC was mapped to 4p13-q12.

TAPVC is commonly classified into 4 types:

Type I: Anomalous connections at the supracardiac level

1. Connection to the Right SVC or Right Azygous vein: The pulmonary veins from each lung join to form a confluence posterior to the LA. An anomalous vessel originating from the right side of this confluence ascends, passes anterior to the hilum of the right lung, and enters the

posterior aspects of the right SVC. In a rare case, the right-sided ascending pulmonary venous vessel connects to the azygous vein.

2. Connection to the Left Innominate Vein (LIV): In this type (the most common type of TAPVC), the pulmonary veins from a confluence immediately posterior to the LA. A venous channel originating from this confluence traverses anterior to the left pulmonary artery (LPA), mainstem bronchus and aortic arch before joining the LIV proximal to its origin from the left jugular and subclavian veins. The LIV then joins the right SVC in a normal fashion. The ascending vein can infrequently pass between the left pulmonary artery and left main bronchus which can lead to extrinsic compression to pulmonary venous flow causing obstruction.

The hemodynamics depend greatly on the presence or absence of pulmonary venous obstruction and the size of the interatrial defect. Supracardiac TAPVC causes right-sided volume overload (with right ventricular dilation and hypertrophy) and pulmonary over-circulation (with various degrees pulmonary hypertension). Restriction of the interatrial communication not only increases pulmonary over-circulation but also diminishes systemic output.  If the pulmonary veins are unobstructed, some patients may be asymptomatic at birth, about 50% will present in the first month with heart failure and the rest will present by the first year of life (most patients have heart failure by 6 months of life). The mortality of untreated patients is 75-85% by 1st year of life. 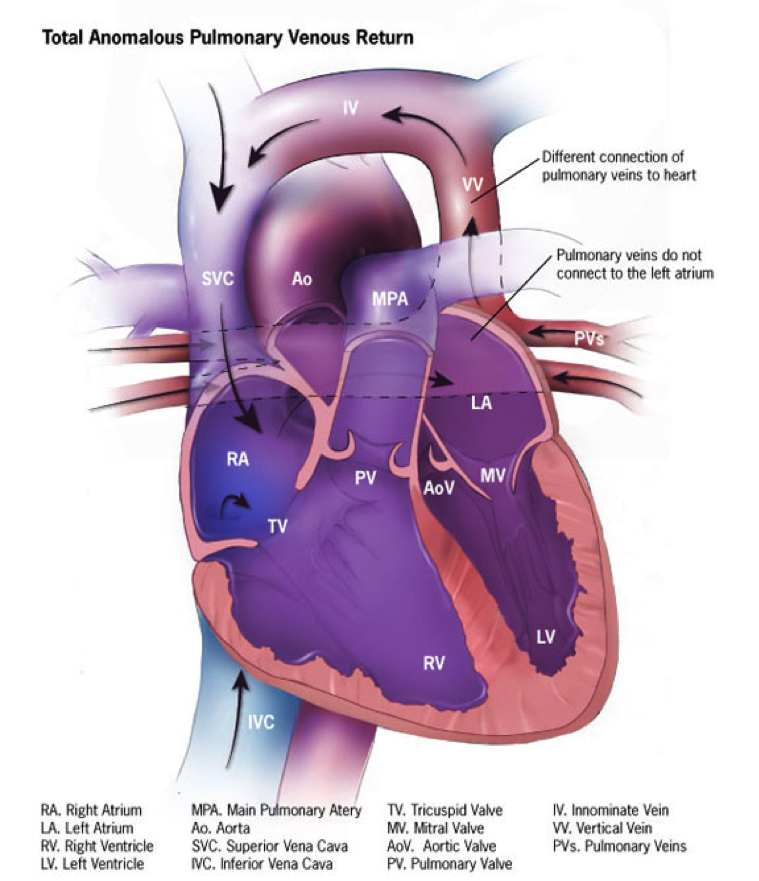