The ductus arteriosus is a blood vessel found in almost all fetuses that communicates between the pulmonary artery and aorta to allow blood to shunt away from the developing lungs while in utero. This vessel typically closes shortly after birth, but can remain patent, particularly in premature infants, and is known as a patent ductus arteriosus (PDA). The typical natural history of a PDA is for smooth muscle contraction and cellular migration to result in functional closure within 24-48 hours of delivery, which is then followed by anatomic closure and ligamentous formation over the subsequent 2-3 weeks. Age, type, and severity of presentation can be variable depending on the size, associated lesions, and relationship of pulmonary and systemic vascular resistances (which dictates shunting pattern). If clinical guidelines recommend closure of a PDA, it can be accomplished either by pharmacotherapy (NSAIDs), surgical ligation or trans-catheter device occlusion.

The incidence of isolated PDA is 1 in 2,000 live births and accounts for 5-10% of all congenital heart disease. However, if “silent” PDA’s (those that produce neither enough shunting for symptoms or an audible murmur) are included the estimation may be as high as 1 in 500. There is a 2:1 female to male ratio.  A PDA is also more common in premature infants.

Patent ductus arteriosus may be present in more than one member of a family with a ~3% chance of PDA in subsequent offspring, suggesting potential genetic factors. The exact genetic relationship is not entirely understood, but some studies have suggested chromosomes 12 and 16 as potential areas of interest. Several genetic syndromes are also noted to have increased frequency of PDA, including trisomy 21, Carpenter’s syndrome, Char syndrome, Holt-Oram syndrome, and incontinentia pigmenti.

Type B (window): large width with a very short length

Type C (tubular): long and without any evidence of constriction

Important views for transthoracic echocardiography include:

Parasternal Long Axis Pulmonary Valve: This view allows for 2D measurement of the PDA at the pulmonary end. It also provides a good angle for Doppler interrogation.

Parasternal short-axis: 2D and color sweeps from this view allows visualization of both main pulmonary artery and aorta when swept superiorly to evaluate for communications between these structures. Color Doppler is important to determine directionality of flow within the PDA. Additionally, small PDA’s may be primarily visible by a jet with retrograde flow seen in the left or main pulmonary artery from this view.  Short axis imaging of the ventricles with M-mode measurements of the left ventricle can be helpful as well.

Subcostal: Doppler of the abdominal aorta may show flow reversal in diastole, which is due to runoff into the PDA.

Suprasternal notch views: 2D and color sweeps from this view between the aortic arch and main pulmonary artery allow for evaluation for the presence and directionality of shunting across the PDA.

It is recommended to use high-frequency probes and small sector width to optimize high spatial and temporal resolution. Generally, 3-5 beat clips are preferred and still frames should be avoided. 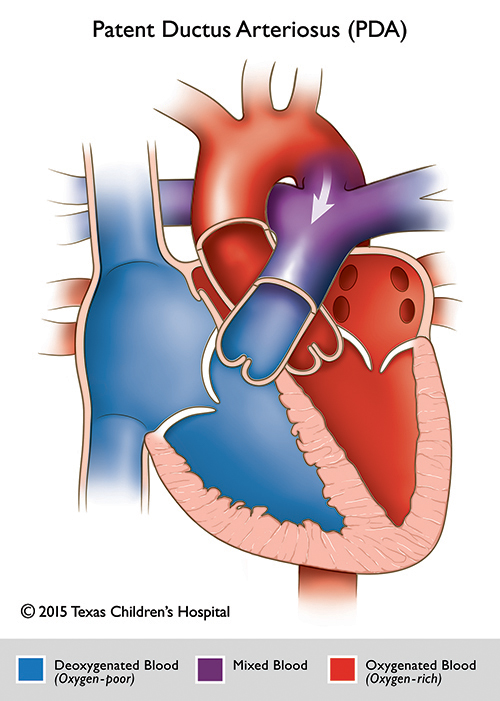